Mauritius: A Conference on the theme ‘Protecting personal data across all economic sectors’ was jointly hosted by the Ministry of Information Technology, Communication and Innovation, and the Data Protection Office yesterday at the Shri Atal Bihari Vajpayee Tower in Ebène.
Read more
Home News Teenage daughters confront father for cheating after his trip to Ghana
Facebook
Twitter
Pinterest
WhatsApp

Teenage daughters hacked into their father’s mobile after he returned from a trip to Uganda. They read the private messages on his phone in front of their whole family, including their mother. The girls also recorded the entire incident on their phones and uploaded it on social media.

The father had recently returned from a trip to Uganda, where he was allegedly meeting with his side chick. On realizing the father’s deceit, the girls called a family meeting and showed the messages publicly on a projector.

Through the video, the girls aimed to confront their father about his affair and cheating. The messages the girls shared in the video were an indecent, graphic, flirtatious exchange of texts. The father, who was the main subject of the video, was seen giving no reaction to the antics of his daughters.

Teenager girls hacked into their father's phone after he returned from Uganda 🇺🇬. They called for a Family meeting read out the messages he was exchanging with his Ugandan side chick. 🙆🏿‍♂🫣

What advice do you give this Man of God pic.twitter.com/ABwdbOA2uV

On the other hand, the daughters were throwing angry words at the older man criticizing him for his cheating. The audience could hear the girl demanding answers from her father.

The video has gone viral on the internet. Additionally, Netizens received the video with varying degrees of support and disgust.

Several people on the internet sympathized with the father after he was embarrassed by his daughters on the public platform. Many even suggested that he should leave the “girls” including the 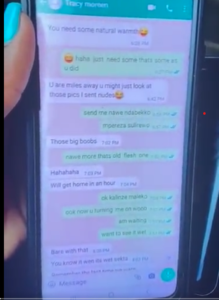 mother, and start a new life.

Additionally, Netizens have criticized the teenage daughters for ousting their father in such a manner. They even suggested that it was the couple’s (parents’) personal matter and did not need to be made privy to the public eye.

The statistics of infidelity are at an all-time high in Ghana. As per a report published in 2017, 62 percent of women in Ghana cheat on their spouses following marriage. Infidelity in marriages is one of the most prominent causes of the dissolution of marriage across the globe.