South Africa: On 28 January 2023 at about 10h30, members of the 15 South African Infantry Battalion were on Observation Post along the Republic of South Africa/Mozambique border in the Bravo Company Area of responsibility when they spotted three vehicles coming from the Northern direction driving Southerly towards the general direction of their Observation Post at the vicinity of Steenbok Trust outside Komatipoort Mpumalanga Province.
Read more
Home News Armed Gang Targets Suburbs: Verulam – KZN
Facebook
Twitter
Pinterest
WhatsApp

South Africa: Six armed suspects in a grey Renault Clio (registration unknown) are being sought for a home invasion that occurred on Pelican Terrace in Dawncrest – KZN this morning (Wednesday).

Members of Reaction Unit South Africa (RUSA) were called out to the property at approximately 08:42. On arrival, it was established that the robbers entered the yard through an unlocked pedestrian gate.

They held up three females and four children aged between one & eleven. The victims were asked to lay on the ground while the suspects ransacked the main bedroom. They stole an undisclosed amount of cash, cellphones and a tv. They fired shots as they fled the scene. A 9mm round was recovered on the veranda.

The suspects are believed to be linked to two other incidents that occurred in Verulam – KZN yesterday afternoon. At approximately 17:01, Reaction Officers responded to a property on Falcon Crescent in Dawncrest after six armed males de-railed the driveway gate.

The homeowner disturbed the suspects when they fled. The same occurred shortly thereafter at a property on Victoria Close in Parkgate. 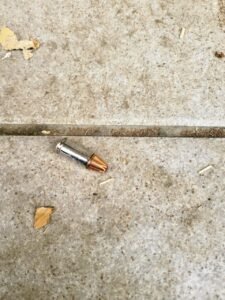