South Africa: Two men who were part of a gang terrorising the Verulam CBD – KZN were arrested by Members of Reaction Unit South Africa (RUSA) a short while ago (Tuesday).

The gang of four were being tracked by Law Enforcement for more than a month. They utilised the dense vegetation and large crowds in the Central Business District to escape during planned operations to apprehend them.

Reaction Officers recruited informers and gathered information on the modus operandi of the robbers. This morning from 04:00, Officers strategically positioned themselves around the Verulam Bus Rank and along the R102 in an attempt to nab the gang in their hideout.

The suspects were among 30 other individuals who were in the process of smoking heroin. Officers entered the bush when the suspects split up and fled. A foot chase ensued, which resulted in two wanted suspects being arrested.

They were found in possession of two knives. Vendors, businessmen and pedestrians celebrated the arrests (video in comments). 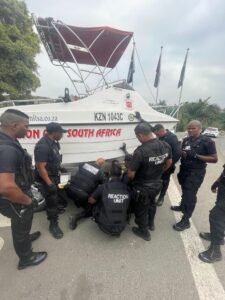 During an interview, the suspects informed Reaction Officers that the phones stolen during robberies were being sold to a foreign national businessman in Verulam.

The suspects are believed to be linked to more than 100 robberies. The 24 and 30 year old males are currently detained at the Verulam SAPS. The suspect’s faces will be made public after they appear in court.