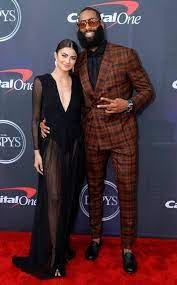 Matt, 29 looked handsome in his brown plaid suit and oversized shades. On the other hand, Racheal appeared to be stunning in her long black gown that featured a plunging neckline and sheer panels.

While being in this event, Matt, the Wake Forest alum posed for a picture with Sha’Carri Richardson, the athlete, and shared it on his Instagram Story and noted, ‘jefe.’

Further, both Matt and Kirkconnel also shared their picture with Paige Buecker, the Basketball player through his Ig story.

In  June, the Bachelor Nation’s duo was off for a romantic gateway to Aspen in Colorado and now they made their appearance in the Award show.

One of the eyewitnesses, at their trip, spotted them, and reported, ” James is ‘leaning in affectionately towards Kirkconnell. This was only a glimpse of the affection they’ve been giving each other the entire time. And they certainly weren’t hiding it.”

The pair seemed to very happy and compatible during their trip. In addition, they all also participated in ropes courses and seemed to be very intimate together.

An Insider told media, “[Their] Aspen getaway was very romantic. Both were bright-eyed, easygoing, and in a very joyous mood. It’s very obvious to onlookers that they are definitely headed in the direction of an engagement. … They were very close and acted as if they had been dating for years.”

James has also made his remarks towards their relationship and said, “Me and Rachael’s relationship was a little different because a lot of things [in the world] were different. We watched a lot of movies. We worked our way through Disney+. There were rough patches in our relationship [and] we actually broke up for a moment. We’re back together [now].”

Jason Sudeikis opens up on his split with Olivia Wilde, his ex- partner!
Christina Haack responds to the critics over her new relationship!
Comment