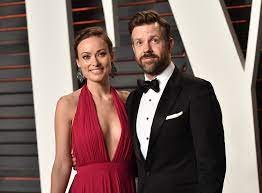 The former couple was engaged Olivia Wilde in 2012 and in 2011 they both began to date one another. Later, in 2014, the ex- pair was blessed with a son Otis. Further, in 2016 Olivia and Jason welcomed a baby girl named Daisy.

In an interview with GQ, the actor has clarified the way he is moving on ahead and is doing his all good to heal from such worsening heartbreak. In 2020, the couple decided to break off and moved forward, after an on-and-off relationship.

Jason said, “I’ll have a better understanding of why [it happened] in a year. And an even better one in two, and an even greater one in five, and it’ll go from being, you know, a book of my life to becoming a chapter to a paragraph to a line to a word to a doodle.”

The comedian also claimed that they separated at the year’s beginning but underwent the break up in November 2020. Since then he is working out on figuring it all out with his optimistic mentality and trying to move on in a better way.

Further, he said, “That’s an experience that you either learn from or make excuses about. You take some responsibility for it, hold yourself accountable for what you do, but then also endeavor to learn something beyond the obvious from it.”

However, now the sources have confirmed that Jason and Keeley Hazell, English glamour model and musician are dating.

Recently, the pair was spotted and their pictures were shared in the media, which gave a glimpse of the couple hugging one another while roaming in the city, In one of the snaps, Keeley, 34 held the arm of Jason, 45, and enjoyed the water view together.

Meanwhile, Olivia moved ahead with Harry styles, the popular musician and singer. An Insider noted, “Olivia and Harry are) going from strength to strength, and (Jason is) still massively upset and, to be honest, is still a little angry.”