South Africa: Mpumalanga learners made their presence felt at the occasion of the South African Cross Country National Championships on Saturday afternoon.

These are the athletes who were recently selected during the provincial championships held at Breyten Primary School on 09 September 2022. The Provincial team put in some brave and extraordinary performances against their counterparts from the other eight provinces.

It was indeed a colourful event as learners, parents and educators who were joyfully united in a sport filled the WSU sports grounds and cheered for their favourite athletes. They watched with such great admiration and cheerfulness as the boys and girls from the nine provinces displayed their God-given talent on the cross-country route.

While building their physical strength, the athletes are able to stimulate other significant senses, which are critical for the learners’ holistic development throughout their learning career and beyond. The cross country competitions, like any other extramural activity, also l contribute to instilling a sense of responsibility and commitment in the learners. 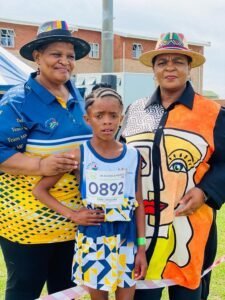 Athletes between the ages of 9 and 19 years participated in the 2, 4, 6 and 8 Kilometre distance cross country national championships for the first since the advent of COVID – 19 in 2020.

It was evident in their performances that they were eagerly waiting for this opportunity to display to the world what they were made of.