South Africa: The Northern Cape Provincial Government hosted a two-day Gender-Based Violence and Femicide Provincial Summit at the Mittah Seperepere Convention Centre in Kimberley on the 28th and 29th of September, 2022.

The Summit took place in response to mounting calls from women’s groups and civil society, and the public at large for urgent action to be taken to address this national pandemic.

Delegates broke into six different commission pillars that focused on and looked into addressing various Gender-Based Violence and Femicide issues that are continuously tormenting the Province.

The commissions were as follows;

MEC for Transport and Safety Liaison, Ms Nomandla Bloem, delivered the keynote address where she highlighted that, ‘’The summit is heartened by nature, robust, honest and frank engagements in the provincial effort to combine and eradicate the pandemic of Gender Based Violence and Femicide”.

She continued, “ The Summit took stock of the progress made since the adoption of the National Strategic Plan (NSP) on Gender-Based Violence and Femicide during the year 2020 and the provincial implementation plan adopted in 2021, respectively.

Overall the Summit is satisfied with the progress, albeit limited to the progress it’s made and continues to make in the space of gender-based violence. Collective leadership remains key in fighting and eventually eradicating the surge of violence in the province”.

MEC for Finance, Economic Development and Tourism, Mr Abraham Vosloo, added that although the programme is orchestrated by civil society, it is supported by the provincial government and business sectors”. 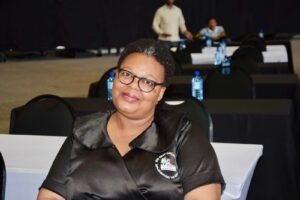 The Northern Cape Provincial Government is pleased to have had the support of all delegates and civil society. Gender-Based Violence and Femicide have proven to be a national pandemic, and we can only overcome this deadly surge when Government and communities come together to fight for the rights of all. We are encouraged that moving forward, the people of the Northern Cape will realise Government’s objective to eradicate Gender – Based Violence and Femicide in its entirety.