South Africa: Brave men and women in the military should always be honoured for their sacrifices because they willingly risk their lives to protect the people’s freedom. This is a selfless act of valour, asking for nothing in return.
Read more
Home Health Pedestrian Run Over: R102 Verulam – KZN
Facebook
Twitter
Pinterest
WhatsApp

South Africa, KZN: A pedestrian was seriously injured after he was run over while attempting to cross the north bound lane of the R102 between Verulam & Ottawa – KZN this morning (Wednesday).

A member of Reaction Unit South Africa (RUSA) was approaching the scene at approximately 07:43 when he stopped to assist a Metro Policeman who was in attendance. 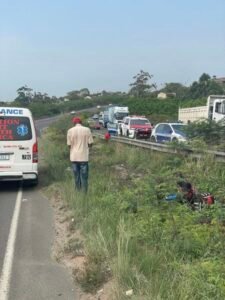 The pedestrian was located in the centre median. RUSA Medics were called out to stabilise the seriously injured male who was transported to a local hospital. It was established that the pedestrian was attempting to cross the R102 when he was struck by a grey Chery Tiggo.

The driver of the vehicle was not injured.