South Africa: On 28 January 2023 at about 10h30, members of the 15 South African Infantry Battalion were on Observation Post along the Republic of South Africa/Mozambique border in the Bravo Company Area of responsibility when they spotted three vehicles coming from the Northern direction driving Southerly towards the general direction of their Observation Post at the vicinity of Steenbok Trust outside Komatipoort Mpumalanga Province.
Read more
Home News Provincial govt deploys two aircraft for aerial control of Veld fires in...
Facebook
Twitter
Pinterest
WhatsApp

More than 80 000 hectares of grazing land have been destroyed by veld fires adjacent to the R31 road between Danïelskuil and Kuruman, moving towards the Lohatla military base, as well as on the N14 between Kuruman and Kathu.

MEC Mme Mase Manopole said she was grateful for the assistance received from the South African National Defence Force in deploying an Oryx helicopter to control the fire near the base and nearby farms.

She further cautioned the public, road users and farmers and farm residents to be on high alert and report any outbreak to the local disaster management team and fire controllers in the area.

“We have not received a report on the loss of life or on infrastructure damage caused by the fire. Our team will do an assessment of the damages caused as the situation gets under control. However, in instances where there is loss of grazing for livestock, the Department will assist farmers with fodder which is stored in our fodder banks for situations like,” she said. 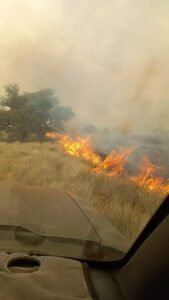