Mauritius: A Conference on the theme ‘Protecting personal data across all economic sectors’ was jointly hosted by the Ministry of Information Technology, Communication and Innovation, and the Data Protection Office yesterday at the Shri Atal Bihari Vajpayee Tower in Ebène.
Read more
Home Climate Sudan: Floods displace hundreds of thousands of people
Facebook
Twitter
Pinterest
WhatsApp

Sudan: Reports indicate at least 136,000 people have been displaced so far due to the floods in Sudan, 1200 schools have been destroyed, and heavy rainfall reports across the country are predicted for the entire coming week on most of the country, so there is no sign of things getting better soon.

Yesterday, 134 people were killed, and destroyed tens of thousands of homes were in the northeast African country’s ongoing wet season, police said.

According to National Council for Civil Defence, Thursday’s floods killed at least 134 people, left 120 others injured, and damaged and destroyed more than 128,000 homes in this rainy season.

Usually, heavy rains fall between May and October in Sudan, which faces severe flooding yearly, wrecking property, infrastructure and crops.

Water can engulf villages and roads in footage of the aired on state television.

People are wandering for shelter and adjusted in tents which are made from tattered fabrics after the flood water washed away mud-brick homes.

In August, the Sudan government also declared a state of emergency due to flooding in six of Sudan’s 18 states.

This season’s death toll has risen from 112 given earlier this month.

As per the latest figures, this year, the highest number of casualties occurred in the central state of North Kordofan, and the largest number of home collapses were recorded in the southern White Nile state.

So far, the main causes of death were collapsing homes, drowning and electrocution.

Even hospitals are also heavily damaged due to flooding in a village in the eastern state of Kassala.

The eastern states of Gedaref and Kassala, North and South Kordofan state, River Nile state, and the region of Darfur were among the worst affected, according to the UN children’s agency, UNICEF. 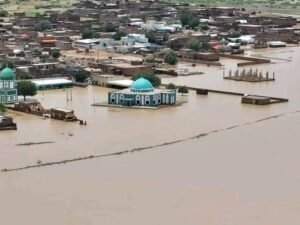