South Africa: Brave men and women in the military should always be honoured for their sacrifices because they willingly risk their lives to protect the people’s freedom. This is a selfless act of valour, asking for nothing in return.
Read more
Home News VP Taban briefs President Kiir on progress of Air Traffic Management system
Facebook
Twitter
Pinterest
WhatsApp

South Sudan, JUBA: On 13th October 2022, South Sudan President Salva Kiir Mayardit on Thursday received a briefing from Vice President for Infrastructure Cluster Taban Deng Gai on the progress of the Construction and establishment of an Air Traffic Management (ATM) system at Juba International Airport as well as the status of road network projects in the Country.

The Vice President briefed the President on the mechanisms his Cluster is undertaking to Fastrack the construction project of the Juba-Rumbek road.

He said more local sub-contractors would be contracted on the road to faster speed up the Construction. 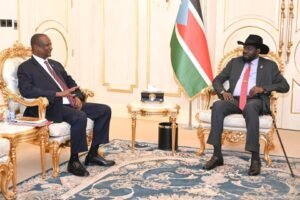 He briefed the President on the progress of the completion of the building designed for an Air Traffic Management (ATM) system that will enable South Sudan to control and monitor its own Airspace and traffic.

VP Taban informed the President that the Construction of the Juba-Bor road is near completion.