South Africa: On 28 January 2023 at about 10h30, members of the 15 South African Infantry Battalion were on Observation Post along the Republic of South Africa/Mozambique border in the Bravo Company Area of responsibility when they spotted three vehicles coming from the Northern direction driving Southerly towards the general direction of their Observation Post at the vicinity of Steenbok Trust outside Komatipoort Mpumalanga Province.
Read more
Home News Horn People understands that TPLF will be barrier to regional peace: Ambassador...
Facebook
Twitter
Pinterest
WhatsApp

Ethiopia: During a local interview with media, an Arabic newspaper widely read in Djibouti, Ethiopian Ambassador to Djibouti, Ambassador Berhanu Tsegaye, spoke about three issues. The Ambassador explained that the Ethio-Djibouti comprehensive strategic relationship, which is symbolic for the countries of the region, is based on principles, mutual respect, and win-win cooperation.

He mentioned that over the past year alone, in terms of bilateral political issues, ports and corridors, trade and investment, etc., the ties are constantly growing, whereas the Embassy has scaled up citizen-centred diplomacy and improved the ties with the Ethiopian community in Djibouti.

In terms of expanding the Green Legacy Initiative spearheaded by PM Dr Abiy Ahmed to the neighbouring countries, Ambassador Berhanu mentioned that more than one hundred and seventy thousand trees were planted in Djibouti in two rounds. 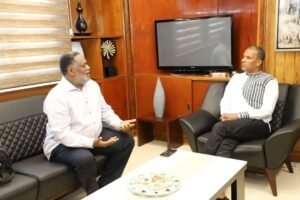 Regarding the current situation, the Ambassador mentioned the fact that the government chose peace and announced a unilateral cease-fire agreement, and later expressed its desire and readiness for peace under the umbrella of the African Union.

The Ambassador added that it is a fact that the people of the Horn know well that the TPLF, which has been an obstacle to peace for our country and the region, is still terrorizing and needs to be genuinely addressed by the international community.

Concerning the GIFA Award that PM Dr Abiy Ahmed received two weeks ago in Djibouti, Ambassador Berhanu noted Ethiopia’s policy reform had created a favourable regulatory environment for the creation of full-fledged IFB banks and Islamic windows in nearly all of the conventional banks and financial institutions in Ethiopia. This was, he added, the Prime Minister’s initiative.