South Africa: Brave men and women in the military should always be honoured for their sacrifices because they willingly risk their lives to protect the people’s freedom. This is a selfless act of valour, asking for nothing in return.
Read more
Home News Mauritius celebrates International Day for the Elimination of Violence against Women with...
Facebook
Twitter
Pinterest
WhatsApp

Mauritius: A colloquium on Gender-Based Violence (GBV), bringing together European experts and Mauritian participants to share best practices as regards tackling this social ill, kicked-off today, at the Ravenala Attitude in Balaclava, in the context of the International Day for the Elimination of Violence against Women observed annually on 25 November.

An initiative of the Ministry of Gender Equality and Family Welfare in collaboration with the European Union (EU), the colloquium is being held on 25, 28 and 29 November 2022.

The 2022 theme is UNITE! Activism to End Violence against Women and Girls. This year’s campaign is an initiative of 16 days of activism to prevent and eliminate violence against women and girls around the world.

The Minister of Gender Equality and Family Welfare, Mrs Kalpana Koonjoo-Shah, the Head of the Development Cooperation of the European Union (EU), Mr Milko Van Gool, and the United Nations (UN) Resident Coordinator, Mrs Lisa Simrique Singh, delivered their remarks at the colloquium.

Experts from Belgium, France, and the Netherlands will share their experiences, challenges and best practices with their peers in Mauritius.

Speaking on occasion, the Gender Minister highlighted that worldwide, one in three women is subjected to physical or sexual violence, with the perpetrator being a close one. On this score, she emphasised that it is today more urgent than ever to respond to this serious social ill which is permeated through all spheres of society. Government, she reiterated, will leave no stone unturned to address this abhorrent social ill which is undermining the health, dignity, security and autonomy of its victims.

Underlining the need to tackle GBV, she called upon the concerted efforts of everyone to put a stop to all forms of violence against women and girls.

The Minister extended gratitude to the EU for supporting Mauritius in drafting the legal amendments with regard to the Protection Against Domestic Violence Act which will be amended to strengthen the protection given to victims.

Regarding governmental initiatives to tackle GBV, she elaborated that a High-level Committee is being chaired by Prime Minister Jugnauth to identify weaknesses and find solutions for the elimination of GBV while adding that an Action Plan put in place by several stakeholders is also underway.

As for Mr Van Gool, he reaffirmed the EU’s commitment to end violence against women and girls, which, he said, is a violation of human rights. The EU condemns all forms of violence and stands in solidarity with women and girls suffering from violence, he stated.

The UN Resident Coordinator, in her address, reasserted the UN’s efforts to leave no one behind so that women and girls fully participate in society. She conveyed the message of the Secretary-General, calling for global action to stand with activists around the world to support survivors of violence. 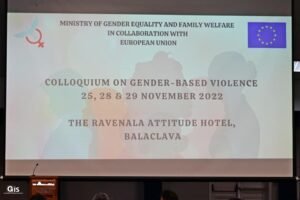 The Technical Assistance and Information Exchange (TAIEX) of the European Union Commission will focus on GBV as a cross-cutting issue across different sectors at the colloquium. Experts and participants will look at the different dimensions of GBV, as well as multidisciplinary cooperation, good practices as part of project engineering, and conversations with victims and “free recall”.