South Africa: On 28 January 2023 at about 10h30, members of the 15 South African Infantry Battalion were on Observation Post along the Republic of South Africa/Mozambique border in the Bravo Company Area of responsibility when they spotted three vehicles coming from the Northern direction driving Southerly towards the general direction of their Observation Post at the vicinity of Steenbok Trust outside Komatipoort Mpumalanga Province.
Read more
Home News President Kiir tasks two Committees to probe Mayom & Tonj North Counties...
Facebook
Twitter
Pinterest
WhatsApp

South Sudan: President Salva Kiir Mayardit, on Monday at his office, presided over the swearing-in ceremony for the members of the investigation committees to investigate incidents of insecurity, including Extra Judicial Killings in Mayom County, Unity State, and Rualbet Payam, Tonj North County in Warrap State.

The two separate committees were mandated to investigate the cause of insecurity, including reported cases of Extra Judicial killings, rape, and destruction of property that occurred in Mayom County, Unity State, as well as the incidents of insecurity in Rualbet Payam, Tonj North County in Warrap State.

The committees shall apprehend and interrogate any suspect (s) at large where appropriate; and shall identify, summon and interview any relevant witness or witnesses of the incident (s).

The two investigation committees shall submit their findings and recommendations to the President of the Republic within Twenty one (21) working days from the date of the oath, which is today.

In his remarks after the swearing-in, His Excellency President Salva Kiir Mayardit urged the members of the committees to confidently carry out the investigations. President Kiir said what had happened in Mayom, and Rualbet cannot be condoned, and justice must be served to deter the occurrence of such incidences in the future.

The chairperson of the Investigation Committee to investigate the incidents of insecurity, including the Extra Judicial Killings in Mayom County, Unity State, Molana Serefino Simon Mizan, Senior Legal Counsel in the Ministry of Justice and Constitutional Affairs, expressed readiness to do their best to come with appropriate recommendations to the President. 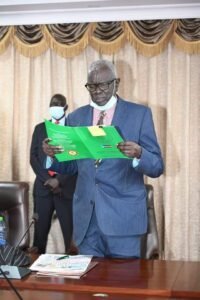 The Chairperson of the Investigation committee to investigate the incidents of insecurity in Rualbet Payam, Tonj North County in Warrap State, Hon. Deng Achuil Adija, DPP, Ministry of Justice and Constitutional Affairs, assured the President that they would carry out their work in accordance with the law.