Mauritius: A Conference on the theme ‘Protecting personal data across all economic sectors’ was jointly hosted by the Ministry of Information Technology, Communication and Innovation, and the Data Protection Office yesterday at the Shri Atal Bihari Vajpayee Tower in Ebène.
Read more
Home News Slam competition: Minister Ganoo urges participants to act as ambassadors of road...
Facebook
Twitter
Pinterest
WhatsApp

Mauritius: Ensuring road safety is a concern for everyone, and we should all act responsibly to ensure that our roads remain a safe space for all of us.

The Minister of Land Transport and Light Rail, Minister of Foreign Affairs, Regional Integration and International Trade, Mr Alan Ganoo, made this appeal during the Award Ceremony of the Road Safety Slam Competition held on 25 November 2022 at Wolmar Public Beach.

In his address on occasion, the Minister deplored the immense suffering that is left behind by each death caused by road accidents and urged the participants of the competition to act as ambassadors of the sensitisation campaign for road safety being spearheaded by the Government. 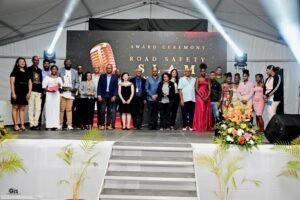 He recalled that the competition was organised in the context of the World Day of Remembrance for Road Traffic Victims, commemorated on the third Sunday of November each year, with the aim of raising road safety awareness among the young population.

Mr Alan Ganoo applauded the efforts and hard work of the participants and expressed conviction that the voice of the youths, through the slam renderings, will better reach the young population. The Minister emphasised that youngsters remain significantly vulnerable to road accidents as they account for more than 50 % of its victims. He also indicated that more than 50% of road fatalities involve motorcycles.

Furthermore, Minister Ganoo pointed out that following Governmental prevention strategies being implemented at different levels, including through improved road infrastructure, there has been a decrease in the number of road fatalities, with 93 from 01 January 2022 up to 25 November 2022, compared to 108 during the same period last year. 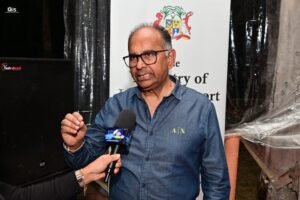 The Minister thus encouraged everyone to sensitise those engaging in life-endangering behaviours and careless driving on the road and stressed that more courtesy, care, and respect from road users would help improve road safety and reduce the road toll.

The competition was organised by the Ministry of Land Transport and Light Rail in collaboration with the Mauritius Film Development Corporation under the theme of the competition,‘We do NOT want more victims to remember, we want to live our lives TOGETHER’. As per the jury voting, Stewelderson Casimir has conferred the first prize and was rewarded with a cash prize of Rs 30,000 and a trophy. 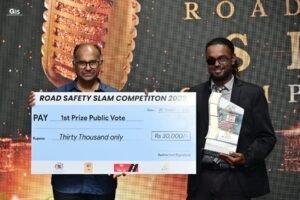