South Africa: On 28 January 2023 at about 10h30, members of the 15 South African Infantry Battalion were on Observation Post along the Republic of South Africa/Mozambique border in the Bravo Company Area of responsibility when they spotted three vehicles coming from the Northern direction driving Southerly towards the general direction of their Observation Post at the vicinity of Steenbok Trust outside Komatipoort Mpumalanga Province.
Read more
Home Health South Africa special inaugural Council
Facebook
Twitter
Pinterest
WhatsApp

South Africa: Newly-sworn in councillor of Harry Gwala District Municipality Mr Lonwabo Nzimande, has promised an increased focus on the municipal slogan “together we deliver and grow”, during the Special Inaugural Council Meeting held today (14 October 2022), at the Council Chamber in Ixopo.

Nzimande, in his acceptance speech as the Harry Gwala Councillor, he said he is committed to ensuring that there is service delivery and doing so together with the current councillors.

“It is an honour and privilege to join Harry Gwala District Municipality as a council. I am committing myself to the saying that together we deliver and grow. I am eager to work together with this team in order to provide service delivery to the people of Harry Gwala District,” said Cllr. Nzimande.

Nzimande was accompanied by his family at the special inaugural council meeting.

The District Mayor, Cllr. Zamo Nxumalo welcomed the new councillor and said he should hit the ground running.

“Our main function in the District is water and sanitation; as you join us today, that will be your mandate. The water issue is very challenging, but we must work hard to make sure we provide clean, drinkable water to our community. The team you are joining is dedicated and hardworking; you should not have challenges working together with us,” said Mayor Nxumalo. 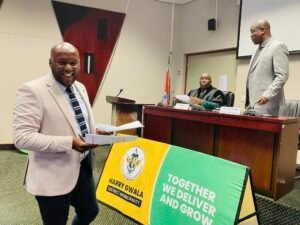 The District Municipal Manager, Mr. Gamakulu Sineke, who facilitated the swearing-in of councillor Nzimande, congratulated him.

He was joined in by Chief Whip Cllr. N. Mhatu, Executive member. Cllr. D. Bekwa, who also congratulated Cllr. Nzimande and wished him the best in his new position.

Nzimande is allocated to the following committees of the council: Budget and Treasury Committee and Local Labour Forum.