South Africa: On 28 January 2023 at about 10h30, members of the 15 South African Infantry Battalion were on Observation Post along the Republic of South Africa/Mozambique border in the Bravo Company Area of responsibility when they spotted three vehicles coming from the Northern direction driving Southerly towards the general direction of their Observation Post at the vicinity of Steenbok Trust outside Komatipoort Mpumalanga Province.
Read more
Home Africa 10th Tana High-Level Forum on Security in Africa Kicks off
Facebook
Twitter
Pinterest
WhatsApp

Ethiopia: The 10th Tana High-Level Forum on Security in Africa kicks off today (October 15), with the presence of Heads of State and Government, Ministers, and high-level delegations from various countries.

Hafsa Maalim, Director of the Forum and moderator of the Tana Forum, recognized Ethiopia as a host country and the dignitaries. 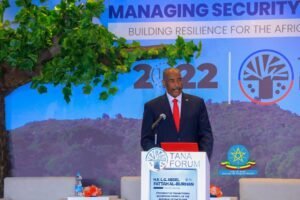 Besides other aspects that could potentially be reflected by counterparts who are attending the Forum, Prime Minister Abiy underlined that he would like to point out three security spheres that indeed need attention during the deliberations of the Forum. The Premier stated that those are water, energy, and data governance. 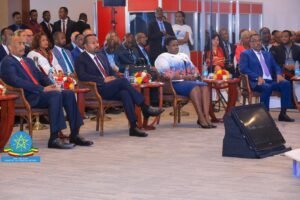 Today, he reiterated, Africa is vulnerable to climate change despite contributing the least towards it. Putting the challenges of the citizens in that regard to the attention of the participants, Prime Minister Abiy noted most of Africa’s people live in rural areas with rain-fed agriculture and that 1/3 of Africans experience water scarcity.

Putting Ethiopia’s efforts in that regard, he said, Ethiopia has embarked on realizing a wide range of renewable energy alternatives. He further briefed Ethiopia’s efforts on hydro-power, gas, and commercial agriculture areas and plans towards energy export to neighbouring countries.

Speaking of the green legacy achievements of the country, Ethiopia has surpassed the target of planting 20 billion trees by planting 25 billion, with a survival rate of over 70% of the seedlings. He underscored that Ethiopia was putting into effect innovative solutions for timely challenges and indicated emission-free policies that are being developed.

He finally, among others, noted the need for data management and stressed that it should be in line with the African Agenda 2063. The Premier also stated that the youth should be integrated with the efforts the country is putting in place. 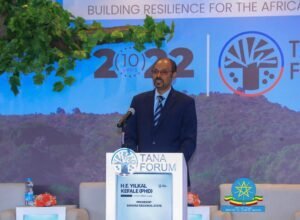