Mr Ousmane Dione also congratulated the parties’ signatories to the Revitalised Peace Agreement on the Roadmap and graduation of the necessary unified forces and the ongoing completion of the graduation that is taking place across the country. 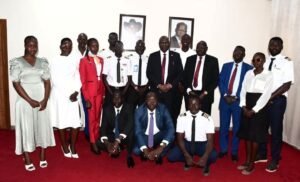 The First Vice President briefed the World Bank Group on the signed Roadmap and the reason why the parties signed it. The aim, he said, was to generate the political will and confidence necessary to implement the remaining tasks such as Constitution, National Election Laws, etc.

Mr Ousmane reaffirmed the commitment of the World Bank to support the people of South Sudan and to look forward to working and cooperating with the leadership of this country.

In a separate meeting, the First Vice President, His Excellency Dr. Riek Machar Teny-Dhurgon, met in his office with a group from South Sudan Supreme Airlines and South Sudan Pilot’s Association led by Ayii Duang Ayii.

The representatives from both South Sudan Supreme Airlines and South Sudan Pilot’s Association briefed the First Vice President on the positive developments and the challenges facing Airline companies in the country.

The meeting discussed possible ways of conducting training for local pilots, engineers, administrators, cabin crews, and all departments of Aviation.

The group has pointed out that 124 people would go for training in October this year, and the categories include pilots, engineers, cabin crews, and administrators to administer the Civil Aviation Authority.

The Pilots said they have come to thank the First Vice President for having been supportive of the South Sudan Pilot’s Association and South Sudan Supreme Airlines in order to deliver services to the people of South Sudan.

Captain Samson Ohide Lomoro, who is the Secretary General of the South Sudan Pilot’s Association, said as pilots, they are proud to serve their country and people to the best of their abilities.