South Africa: On 28 January 2023 at about 10h30, members of the 15 South African Infantry Battalion were on Observation Post along the Republic of South Africa/Mozambique border in the Bravo Company Area of responsibility when they spotted three vehicles coming from the Northern direction driving Southerly towards the general direction of their Observation Post at the vicinity of Steenbok Trust outside Komatipoort Mpumalanga Province.
Read more
Home News Traditional Chiefs, Elders from UNMISS protection sites meet President Kiir
Facebook
Twitter
Pinterest
WhatsApp

JUBA, South Sudan: President Salva Kiir Mayardit on Wednesday met in his Office with the traditional Chiefs and elders that are responsible for the Internal Displaced Persons at the United Nations Mission in South Sudan (UNMISS), Protection of Civilians Sites (POCs) in Juba.

The Traditional chiefs and Elders discussed the current situation of the IDPs living inside the POCs.

The meeting touched on ways how to relocate the IDPs out to their permanent residential areas for settlement.

During the meeting, the traditional leaders raised some concerns and challenges facing the IDPs at POCs. They mentioned a lack of clean water, schools for their children, health facilities and poor living conditions at the camps. 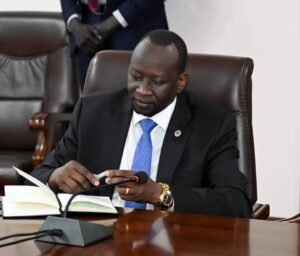 They told the President that they had observed that the peace was holding and there were no insecurities. Therefore, they expressed their readiness to relocate from POCs to a designated area (land) in Central Equatoria State for settlement.

In his remarks to the traditional leaders and Chiefs, President Salva Kiir Mayardit said those that are still at the POC site should come out in order to build their lives back.

“You are all my people; the problem that I have not been meeting you is because you decided to lock yourself inside the POCs; I urge you to come out of POCs and find settlement so that you can build your lives and raise your families. Go and tell those that are still hiding in the camps that you have met Salva Kiir, and he is ready to welcome and meet you anytime”, President Kiir told the Chiefs. 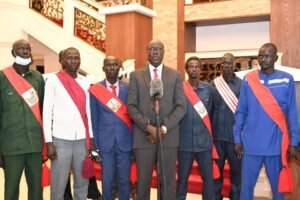 Speaking to the media after the meeting, the Paramount Chief, Thomas Tut, thanked the President for accepting their call and giving land in Central Equatoria State for settlement.

Chief Tut called upon the Chiefs in all POCs across the country to engage and bring out their people from POCs and relocate them to areas of settlement to enable them to build their lives.