South Africa: Brave men and women in the military should always be honoured for their sacrifices because they willingly risk their lives to protect the people’s freedom. This is a selfless act of valour, asking for nothing in return.
Read more
Home News Uthukela district golden games send off
Facebook
Twitter
Pinterest
WhatsApp

The event converged at the Department of Health, whereby the team comprised over 130 men and women participants.

This year’s Golden Games will be taking place at eThekwini Municipality over a two-day period from October 12 to 14.

The two-day sporting extravaganza will feature more than 20 traditional and indigenous sporting codes. The senior citizens will be competing with other players from other districts within the province.

Ndlunkulu Shabalala conveyed her message of support and words of encouragement to the participants.

The senior sportsmen and women will be participating in the Annual Golden Games and will take part in various sport codes such as soccer, athletics, jakskei, ball pass and kick, relay, ring the stick and brisk walking. 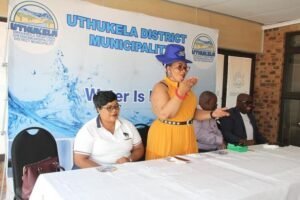 Golden Games event is organized to encourage a healthy lifestyle for the elderly and to assist with keeping the elderly healthy and active.

The objective of these games is to promote increased participation for older people in sport and recreational activities for lifelong wellness.

The leadership of the municipality wished them well, and they believed their participation in sports would benefit the elderly both mentally and physically. May our old ladies and gentlemen represent us well and bring back the medals!