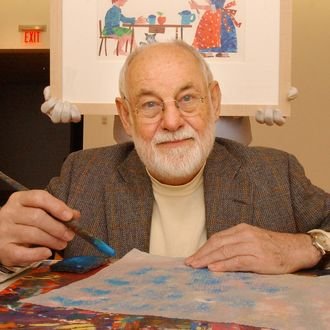 Eric Carle, the most beloved author amongst the children and also an illustrator, died at the age of 91 due to kidney failure. As per the statement made by the Penguin Young Leaders, on behalf of the family stated that Carle died Sunday at his Northhampton, MA summer studio. He died surrounded by his family. Eric Carle married special educator Barbara “Bobbie” Carle until her death in 2015. Together, the pair founded the Eric Carle Museum of Picture Book Art.

Eric Carle was born in Syracuse, New York. Notably, he began to write children’s books in his late 30s. In 2019, he mentioned in an interview that why he thought the story endured for five decades. He stated, “For many years, my publisher and editor and I did not know the reason for The Very Hungry Caterpillar being so popular. But over time, I’ve come to feel that it is a book of hope. And it is this hopeful feeling that has made it book readers of all ages enjoy and remember.”

Eric was born in upstate New York to German immigrant parents. Thus, in mid-1930, he moved to Stuttgart because his mother was homesick. His father being an Army Personnel made Eric experience the trauma of war. Further, this gave Carle a different way of seeing the world. Later on, he made his way back to New York and worked as a graphic designer and then at an advertising agency.

In 1967, he started illustrating “Brown Bear, Brown Bear, What Do You See?”  He did this for his friend Bill Martin Jr. In the 50+ years of working in the field, he illustrated over 70 books for children. He is perhaps most well known for The Very Hungry Caterpillar, which Carle wrote and illustrated in 1969. It is not just the book that remains popular, there are animated versions of the story, various merchandise spin-offs, and stage production that to date has been watched by a million children.

Kamala Harris neglects the memorial day by enjoying the long weekend!
Moderna officials claims their vaccine to be highly effective in teens!
Comment