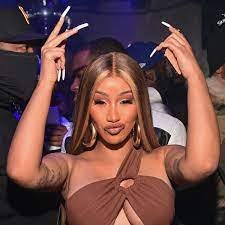 Belcalis Marlenis Almánzar, professionally known as Cardi B, the popular American singer and rapper is once again expecting. This secret of her hidden pregnancy was revealed by her spouse,  Offset, the American rapper.

On Sunday evening, the rapper performed with her husband at the BET awards along with her ‘Migos’ group. Cardi joined the group for ‘Type S–,’ as the Trio finished ‘Straightenin.’ The rapper showed off her baby bump while being on the stage and wore a black bodysuit furnished with rhinestones.

The pair, in 2017, tied a knot and after the hardships of ups and downs, they even decided last year to make a move for divorce but later in November the couple reconciled. Cardi and Offset already owe a daughter, Kulture Kiari, 2. In addition, Cardi’s husband also owes a daughter Kalea, 6, and sons Kody, 6, and Jordan, 11, from his previous relationships.

After, the show, the host Taraji P. Henson joked and said, “Cardi and Offset, giving us life – literally,” following the news break. Previously, Cardi announced about her first pregnancy while she appeared for a Live TV show and revealed the news, while performing on the show, ‘Saturday Night Live’ in August 2018.

The actress is very serious in her relationship with Offset and once said, “It’s been a blessing, me meeting him and meeting his friends. I see how hard they work. And that motivated me to work even harder. And I see how good things are going for them and how popping it is to be number one. And I’m like, I want that. A lot of people just see they jewelry and they money, but I don’t think a lot of people see how hard they work for that shit every single day.”