South Sudan, Juba, 3rd October 2022: President Salva Kiir Mayardit on Monday was briefed by the Minister of Health, Hon. Yolanda Awel Deng on the Country’s preparedness and response plans to curb the Ebola Virus outbreak in the Country.

Minister Awel told the President that South Sudan had not confirmed any case of the Ebola Virus. She further stated that the Ministry had received suspected cases that were under isolation at the border but in stable condition.

The Minister assured the public that her Ministry is well-prepared and working hard to prevent the Ebola outbreak in the Country.

“We got only suspected cases in the isolation centres at the border, and most of those cases are in stable condition. We have collected their samples, and we have sent them to be analysed, and we are still waiting for the results. “Hon. Yolanda Awel, Minister of Health, stated during the meeting on Monday.

President Kiir reiterated that he is doing all he can to make sure that the people of South Sudan are safe from the Ebola outbreak in the Country. 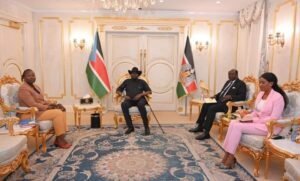 Therefore, he said he would convene an extraordinary Council of Ministers meeting to ensure that the government is prepared to curb the outbreak in the Country.