Mauritius: A Conference on the theme ‘Protecting personal data across all economic sectors’ was jointly hosted by the Ministry of Information Technology, Communication and Innovation, and the Data Protection Office yesterday at the Shri Atal Bihari Vajpayee Tower in Ebène.
Read more
Home Africa President Kiir meets paramount Chiefs from communities of Juba, Bor and Rumbek
Facebook
Twitter
Pinterest
WhatsApp

JUBA, South Sudan: President Salva Kiir Mayardit met with the area paramount chiefs of the communities from Central Equatoria, Jonglei and the Lakes States living along the highways of Juba, Bor and Juba to Rumbek to discuss issues related to basic service delivery.

The meeting with the community chiefs touched on several areas that matter to the communities mainly from Central, Jonglei and Lakes States on how those communities can benefit from the road network in terms of services delivery in the areas of Agriculture, provision of schools for their children, hospitals and supply of clean water.

President Kiir told the chiefs that the fight now is on how to eradicate hunger across the Country. The President assured the chiefs of his commitment to ensuring that no South Sudanese die of hunger.

The President said he wants to see all the states and areas across the Country connected by road in order to ease mobility and boost the socio-economic development in South Sudan.

The Chiefs expressed happiness for the roads constructed and that their people have suffered because of a lack of good roads, clean water, schools and hospitals.

“I want you to benefit from the road network and that is why I called you today to establish understanding and cooperation for the government to deliver services to the people at the grassroots. We want to ensure that agriculture is carried out at the areas, schools are built for our children, hospitals are built for our people at the grassroots and clean water is provided”, President Kiir told the Chiefs during his meeting on Wednesday. 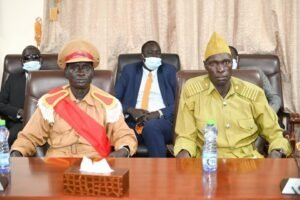 The Chiefs further reiterated that the agriculture initiative in their areas would help to fight hunger at the grassroots. They further expressed their readiness to mobilise the young people to engage in agriculture activities. They said the road network had provided security and peace in their areas.

The meeting was attended by the Minister of Finance and Planning, Dier Tong Ngor, Executive Director in the Office of the President, Hon. James Deng Wal.