South Africa: Speaking at the occasion of the commemoration of the OR Tambo Mathematics, Science and Technology Academy this morning, MEC Majuba said:

“This morning, we join the people of the Country and the World in celebrating the birthday of one of the late founding fathers of our Country’s democracy, a struggle icon and liberation hero, Oliver Reginald Tambo. OR, as he was affectionately called, was an astute Mathematics and Physical Science teacher; hence the Mpumalanga Department of Education commemorates the establishment of the OR Tambo Mathematics, Science and Technology Academy today, on his birthday.

We are grateful to be associated with the great name of the struggle icon and a colossal person in Reginald Oliver Tambo.

As a struggle hero, he is an architect of our liberation as he marshalled the struggle for the liberation of the people of South Africa during the darkest period of time when being in the liberation movement, let alone leading there, was not fashionable.

Through three decades of dedication and sacrifice, OR led the struggle for liberation outside the borders of South Africa, forging international support for the liberation movement and isolation from the Apartheid regime.

His life has been a life of a true leader, dedicated to the achievement of the liberation of the people of this land. 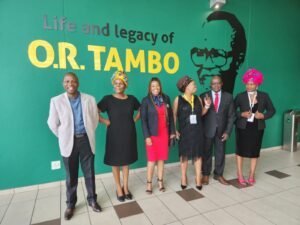 The light and flame that he ignited through his contribution as a leader of the struggle for emancipation, as well as a teacher, continues to brighten the lives and paths of our people as a lamp towards selflessness and light towards upright leadership.

The OR Tambo MST Academy was established in 2013 to increase the number of learners taking Mathematics, Science and Technology subjects as well as to improve the quality of the passes.”