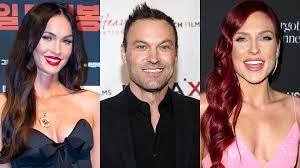 Meghan Fox, the popular American actress, and model is these days supporting her ex-spouse, Brian Austin Green on his love relationship with his girlfriend, Sharna Burgess.

On Tuesday, the actress, 35 wrote that ‘she is grateful for Sharna,’ after the post shared by Austin. The actor shared a picture of himself kissing Sharna Burgess, the Dancing with the Stars Pro, while their visit to Walt Disney World’s Animal Kingdom.

Austin also added the caption to the picture shared and noted, “It’s been a really long time since I’ve been with someone I can truly share life with.”

Meanwhile, Sharna Burgess replied to the picture in the comments and wrote, “There’s no one else I could ever imagine sharing it with. I love you.”

In addition, Fox also commented and wrote, “Grateful for Sharna,” with a purple heart emoticon, as captured by the Ig account Comments by Celebs. Thus, the comment has since been deleted.

Also, Sharna Burgess shared a picture of herself while smooching the cheek of Brian Green, while their visit to the Avatar-themed area of the Florida-based amusement park. She wrote, “Even at Disney World you’re all I see. I could never get enough of you.” And also added by stating, “Pandora was pretty epic tho.”

Significantly, Sharna and Green revealed their relationship and claimed that the quarantine even made both of them more connected than they had imagined.

Sharna Burgess mentioned, “We met at a coffee shop, then had a few dates, and then we were locked in a house together. I was grateful for that because it allowed us to really take our time and it was really awesome.”

Christina Haack responds to the critics over her new relationship!
Heidi Klum claims that she tried but it didn’t worked with her ex- husband, Seal!
Comment