South Africa: Brave men and women in the military should always be honoured for their sacrifices because they willingly risk their lives to protect the people’s freedom. This is a selfless act of valour, asking for nothing in return.
Read more
Home News Premier Dube-Ncube announces several interventions to improve road safety
Facebook
Twitter
Pinterest
WhatsApp

Africa: As part of a series of interventions to improve road safety and revive economic activities in oPhongolo, the KwaZulu-Natal Government led by Premier Nomusa Dube – Ncube revealed plans that will be rolled out in the coming days, which include the opening of a satellite traffic station in the area.

The plans are aimed at improving road safety measures following the fatal truck crash, which killed 20 people on 16 September 2022. Interventions include intensified law enforcement operations to clamp down on lawlessness.

Yesterday, Premier Dube -Ncube and MEC for Transport, Community Safety and Liaison, Sipho Hlomuka, were part of a government delegation that met with the bereaved families of the oPhongolo crash, stakeholders and the community. 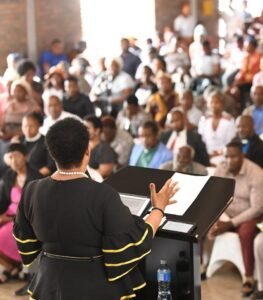 The engagement meetings were also attended by the Chairperson of the Zululand House of Traditional Leaders, iNkosi Ntshangase, local municipality, truck owners and community leaders.

Premier Dube-Ncube provided social relief and comforted the bereaved families during a special prayer for healing and an end to road fatalities.

As part of demonstrating the government’s effort to ensure compliance on provincial roads, Premier Dube -Ncube and MEC Hlomuka also participated in a multi-disciplinary law enforcement operation on the N2 in Godlwayo. 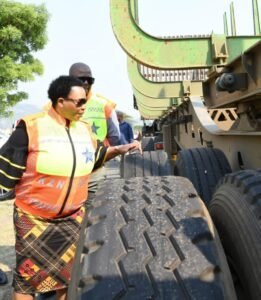 Since September 2022, more than 503 vehicles have been stopped on the N2 in oPhongolo, with more than 61 charges meted against errant drivers and companies. More integrated operations are planned as part of the interventions, with police focusing on fighting crime, including the transportation of drugs.

A foreign national was arrested during today’s operation for trafficking dagga.

“We are going to be intensifying the law enforcement operations as part of improving road safety in the area. Our priority is protecting human lives. We must, however, balance that with the reviving and rebuilding of the economy in order to create jobs. We are confident that with the comprehensive safety plans that have been developed and measures which we announced today, we will work together with the community of uPhongolo to ensure stability in the area. We have also had an opportunity to meet and pray with the families of the victims who lost their lives in the tragic accident; because providing post-trauma support and counselling for the families is our main priority as government,” said Premier Dube-Ncube.

Some of the interventions announced by the Premier today included the following:

The community leaders and various stakeholders have agreed to reopen the road to allow tipper trucks to operate on the N2.

The road has been closed by the community after the truck accident in protest against trucks operating in the area. The reopening of the road will be supported by an improved security plan.