South Africa: On 28 January 2023 at about 10h30, members of the 15 South African Infantry Battalion were on Observation Post along the Republic of South Africa/Mozambique border in the Bravo Company Area of responsibility when they spotted three vehicles coming from the Northern direction driving Southerly towards the general direction of their Observation Post at the vicinity of Steenbok Trust outside Komatipoort Mpumalanga Province.
Read more
Home News South African municipalities intervene to save over 300 Jobs
Facebook
Twitter
Pinterest
WhatsApp

South Africa: Dr Nkosazana Dlamini-Zuma Municipality Mayor Cllr Sindisiwe Msomi indicated that the municipality could not afford to allow Sappi to dismiss so many employees as this will have devastating effects on many families during a meeting between the two Municipalities, Sappi Management, Local Traditional leaders: Izinduna and New Members of the Project Steering Committee Members that took place on Friday the 4th of November 2022.

“Government depends on private companies which invest in our towns to create jobs. This dismissal will have a negative economic impact on the Dr Nkosazana Dlamini-Zuma Municipality. We are going to do everything in our power to try and save jobs,” remarked Mayor Msomi.

This was a follow-up meeting from a series of meetings that took place prior to this one. The Chairperson, Mayor of Ubuhlebezwe Municipality, Cllr Thobile Ngubo, emphasised the importance of cooperation between the public and private sectors. The common goal is improving the lives of our people. 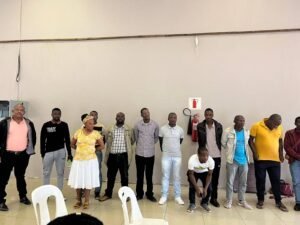 It can be reported that 328 people have been dismissed from work and therefore an amicable solution is needed urgently to resolve this problem. Everyone is affected and particularly Councillors who had to prioritise this sitting.

“Our responsibility as the government in any sphere remains to create a conducive environment for businesses to flourish. I must say, in this instance, we cannot afford to neglect this key responsibility; hence cooperation between ourselves and Sappi is important so as to find a solution to reinstate the dismissed employees; we need to find ourselves and meet the needs of businesses if we are to grow our local economies and create more jobs” concluded Mayor Msomi.

The role of the newly elected Project Steering Committee, which consists of 12 Members from all affected areas of Ward 3 under Ubuhlebezwe and Ward 15 under Dr Nkosazana Dlamini Zuma Local Municipalities, was explained, and emphasis was made on them leading public education on protecting forests and the importance of adherence to work ethics by SAPPI employees.

Both Mayors emphasised the role of the PSC and Izinduna in ensuring that forests are not deliberately put on fire. All Employees are expected to abide by the company’s HR policies at all times, said both Mayors.

Sappi Management assured the meeting that all workers would be back at work on Monday 7th of November 2022.