Mauritius: Phase one of the Beach Management Plan at the Belle Mare public beach, being spearheaded by the Beach Authority, was launched by the Minister of Environment, Solid Waste Management and Climate Change, Mr Kavydass Ramano, on Friday, 02 December 2022.
Read more

Mauritius: The Annual Symposium on the link between Gender-based Violence and Religion, which is being held at the Gold Crest Hotel in Quatre-Bornes, was launched this morning by the Minister of Gender Equality and Family Welfare, Mrs Kalpana Koonjoo-Shah.
Read more

Mauritius: The United Nations (UN) Resident Coordinator, Mrs Lisa Simrique Singh, paid a courtesy call to the President of the Republic of Mauritius, Mr Prithvirajsing Roopun, this morning at the State House in Réduit.
Read more

The Minister of Environment, Solid Waste Management and Climate Change, Mr Kavydass Ramano, the Minister of Youth Empowerment, Sports and Recreation, Mr Stephan Toussaint; and the Minister of National Infrastructure and Community Development, Mr Mahendranuth Sharma Hurreeram, the Ambassador of Japan to Mauritius, Mr Shuichiro Kawaguchi, and other personalities were also present at the inauguration ceremony.

In his address, Prime Minister Jugnauth stated that Blue Bay is well known internationally for its beautiful beach and marine park, adding that this new infrastructure will further enhance the landscape of the region.

The Arena, he indicated, will be used for the Commission de la Jeunesse et des Sports de l’Océan Indien (CJSOI) Games 2022, which will be held from 04 to 11 December.

The Beach Arena court, he underlined, has been constructed in line with world standards so that the country can organise competitions both at the regional and international levels. He called on the sports federations to benefit from the Arena, which will help improve the performance of athletes.

The Prime Minister also spoke of the challenges brought by the COVID-19 pandemic while highlighting that Government has not compromised on infrastructural development in the country. Government, he underpinned, is committed to enhancing the quality of life of the citizens and ensuring that the country continues to progress.

Speaking on the CJSOI games, the PM highlighted that necessary resources had been put at the disposal of organisers to ensure that the event took place in the best possible conditions.

Prime Minister Jugnauth encouraged the citizens, irrespective of their age, to practice a sport on a regular basis. Organisations like Active Mauritius, he emphasised, were set up to act as sports ambassadors to promote a sports culture and sensitise the population to the benefits of physical activities. 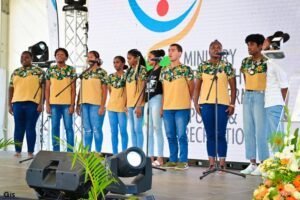 Several sites, he said, have been restructured and developed to provide the population with sports infrastructure and amenities for jogging and sports activities across the island.

In addition, he indicated that a mini soccer pitch was recently inaugurated in Savanne, and a sports Complex is currently under construction at Triolet.

The Prime Minister made an appeal to the population to participate actively in the CJSOI Games and wished the athletes the best of luck.

The Sports Minister recalled that in 2018, Government came forward with the National Sport and Physical Activity Policy in view to promote the practice of regular physical activity and address health issues among the population.