South Africa: On 28 January 2023 at about 10h30, members of the 15 South African Infantry Battalion were on Observation Post along the Republic of South Africa/Mozambique border in the Bravo Company Area of responsibility when they spotted three vehicles coming from the Northern direction driving Southerly towards the general direction of their Observation Post at the vicinity of Steenbok Trust outside Komatipoort Mpumalanga Province.
Read more
Home News Mauritius: New Centenarian, Mrs Soobamah Ramadu, celebrates her birthday
Facebook
Twitter
Pinterest
WhatsApp

An official ceremony was organised by the Ministry of Social Integration, Social Security and National Solidarity to honour the new centenarian. Mrs Ramadu received, from the authorities, a cheque amounting to Rs 26,203; a centenarian medal; a certificate; an air fryer; a gift from the Senior Citizens Council; and a cheque to the tune of Rs 10,000 from the National Solidarity Fund.

The Mayor of the Municipal Council of Curepipe, Mr Hans Berty Marguerite, the Chairperson of the Senior Citizens Council, Mr Hanslall Seeboruth, and other personalities were present.

Mrs Ramadu, also known as “Mama”, was born on 18 October 1922 at Le Vallon Estate. Her father was a priest at the Kovil, and her mother was a housewife. Mrs Ramadu had three brothers and four sisters, who have all passed away. She never attended school and worked as a cook for Mrs Dalais.

She got civilly married to Mr Moonsamy Jhurmenany Ramadu, a manservant (Valet de Chambre), on 19 February 1946. He passed away 35 years ago. The couple was blessed with five children, two sons and three daughters; one son has passed away. She has 15 grandchildren and 29 great-grandchildren. 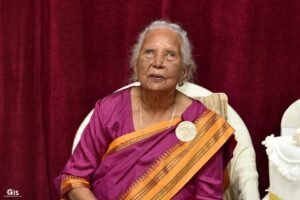 Mrs Ramadu enjoys eating fried fish and bread. She attributes her long life to prayer, honesty and good family care. Her hobbies are watching TV and listening to the radio. She cherishes memories of her childhood. She moves around with the help of a stick and suffers from calculus in her bladder.