Mauritius: A Conference on the theme ‘Protecting personal data across all economic sectors’ was jointly hosted by the Ministry of Information Technology, Communication and Innovation, and the Data Protection Office yesterday at the Shri Atal Bihari Vajpayee Tower in Ebène.
Read more
Home News Mauritius: Training workshop held on project financing and facilitation in AIS region
Facebook
Twitter
Pinterest
WhatsApp

Mauritius: A training workshop focusing on renewable energy project financing and facilitation in the Atlantic, Indian Ocean and South China Seas (AIS) region was held yesterday at the Intercontinental Hotel in Balaclava.

The Minister of Energy and Public Utilities, Mr Georges Pierre Lesjongard, delivered his address at the opening ceremony.

The workshop, organised by the International Renewable Energy Agency (IRENA), will contribute to enhancing the capacities of local players in the AIS region as well as Small Island Developing States (SIDS) in structuring renewable energy project financing deals while increasing the number of projects.

In his keynote address, Minister Lesjongard expressed appreciation to the IRENA for the assistance provided for the materialisation of the workshop while emphasising that it is playing a leading role in energy transformation as a centre of excellence for knowledge and innovation. With its 168 members, including Mauritius and the European Union, he stated, the IRENA is a global voice for renewable energy, a network hub and a source of advice and support for countries.

Speaking on the high vulnerability of SIDS and similar countries to the effects of climate change and its adverse impacts on socio-economic development, the Minister noted that they are the ones who are mainly hit.

On this score, the Energy Minister elaborated that Mauritius is implementing a series of measures and projects to meet its Nationally Determined Contribution pledges made at COP 26.

He reiterated the objective of the Government to accelerate the green energy transition by reducing the country’s greenhouse gas emissions by 40% by 2030.

“As such, we are committed to moving away from fossil fuels by phasing out the use of coal by 2030 and increasing the contribution of renewable energy in its electricity mix to 60% by 2030”, he said. 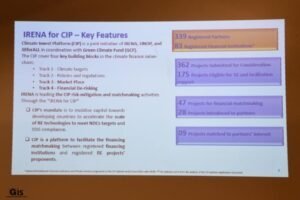 The government added the Minister had been closely collaborating with the IRENA to achieve these targets through three projects, namely the implementation of a roadmap for marine resource development in the country prepared by IRENA in 2015; the implementation of the solar home project on 10 000 houses in 2017 involving 1kw rooftop photovoltaic systems, on houses under the social tariff whereby the customers monthly benefit from 50kwh electricity free of charge over a period of 20 years; and the setting up of a SolarCity simulator to assist homes, businesses and local authorities in evaluating the prospects for electricity generation using rooftop-mounted solar photovoltaic.

Minister Lesjongard also indicated that the IRENA had developed the SolarCity simulator for the region of Port Louis, and training was provided in February 2022 to various stakeholders, including staff of the Ministry, MARENA, Central Electricity Board, University of Mauritius and participants from the private sector.

In the face of an international energy crisis such as the Russia-Ukraine war, he mentioned that the alternative available is renewable energy.

However, he stated there are several barriers and challenges to the implementation of renewable projects, such as a lack of technical, financial, legal and institutional frameworks. To this end, the Minister observed that Mauritius as a SIDS relies on the assistance of the international community and donor agencies in helping to attain these targets.