Mauritius: Some 60 women who have completed various pieces of training on solar PV, entrepreneurship and communication skills under the Green Climate Fund (GCF) project were awarded certificates yesterday during a ceremony held at the Labourdonnais Hotel in Caudan.

The training in “Entrepreneurship and basics of photovoltaic” and “Skills development for solar PV value chain”, was conducted by the UNDP in collaboration with MARENA, the Mauritius Institute of Training and Development, and the University of Mauritius under the GCF project.

Assistance was also obtained from the Clinton Climate Initiative under the Clinton Foundation and from the Australian High Commission.

The training highlighted the principles of photovoltaic technology, the basics of communications for community outreach, as well as enterprise development.

In his address, Minister Lesjongard recalled that Government had placed women empowerment and gender mainstreaming at the centre of its development. It is in this context that we have adopted a National Gender Policy for the period 2022- 2030, which provides a framework for collective action by public and private-sector stakeholders to achieve gender equality, empower women and girls, and ensure their full enjoyment of all human rights in line with the United Nations Sustainable Development Goal No 5, he said.

He highlighted that the Policy outlines the Government’s commitment to gender equality as a development and human rights concern adding that it aims to promote the inclusion of gender equality in legislation and policies and to ensure equal participation of women in decision-making.

Speaking about the renewable energy sector, Minister Lesjongard underlined that Government has pledged to shift to a low-carbon economy with the aim of helping Mauritius to achieve the 60% renewable energy target and phase out coal by 2030.

He affirmed that his Ministry is working relentlessly to tap into its full potential and has reviewed the Renewable Energy Roadmap this year. The Roadmap, he added, charts a series of actions that are required, including gender mainstreaming measures in green jobs. 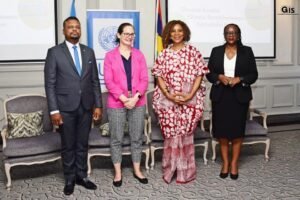 Mr Lesjongard further underlined that Government is investing in people through capacity-building programmes which are the main vectors for sustainable growth and development. These types of courses have been designed to help beneficiaries acquire the necessary skills to join the job market.

For her part, Ms Eziakonwa said that climate change is the single biggest issue facing humanity today and stressed the need to move away from our dependence on fossil fuels in favour of cleaner alternatives. The need for an energy supply that is both clean and affordable to ordinary citizens is of vital importance if society is to tackle both the climate crisis and cost of living issues in a sustainable way, she added.

Speaking about the project, she emphasised that it is aligned with the Government’s National Gender Policy Framework, which aims to address gender mainstreaming through a number of initiatives. They include:

As for Ms Shaw, she stated that as a fellow island nation in the Indian Ocean, Australia understands the urgency of responding to climate change.

She said that Australia appreciates the partnership with countries like Mauritius, which have tirelessly advocated for climate change action in global forums.

A significant part of Australia’s embrace of renewable technologies has been through rooftop solar, she said while expressing satisfaction that Mauritius has similar laudable ambitions to increase the usage of renewable energy.