South Africa: Brave men and women in the military should always be honoured for their sacrifices because they willingly risk their lives to protect the people’s freedom. This is a selfless act of valour, asking for nothing in return.
Read more
Home Politics President Kiir bids farewell to South Sudan Ambassador to Uganda
Facebook
Twitter
Pinterest
WhatsApp

The meeting between the President and the Ambassador focused on the current cooperation between South Sudan and Uganda and how the relations can be improved with special emphasis on the Economy, Trade and Security.

The Ambassador made a courtesy call today prior to his departure to his work station in Uganda.

The President highlighted to the Ambassador the importance of South Sudan’s relations with Uganda.

South Sudan Government’s official page on Twitter also wished him good luck in the future with his picture.

Uganda & South Sudan have strong ties and vibrant historical relations. The Geopolitical significance of the business summit is absolute & a channel to help improve trade relations, according to South Sudan’s Ambassador to Uganda, Simon Duku Michael.

The outgoing Ambassador of South Sudan to Uganda, Ambassador Simon Michael Duku, also paid President Museveni a courtesy visit at State House Entebbe as he leaves for South Africa after concluding his tour of duty here.

Minister of State Prof. Nshuti Manasseh also received a courtesy call from Simon Duku Michael Musa, Ambassador of South Sudan to Rwanda with Residence in Kampala, Uganda, for a farewell. 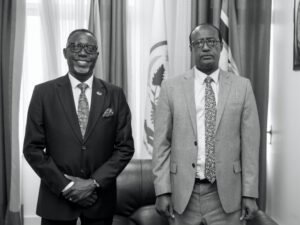 Namunkekera Rural Industrial Center hosts a South Sudan delegation led by Ambassador Simon Duku Michael. Held a meeting with Gen Saleh and toured the industries. The delegation was pleased with the progress of the Industrial Complex.