South Africa: On 28 January 2023 at about 10h30, members of the 15 South African Infantry Battalion were on Observation Post along the Republic of South Africa/Mozambique border in the Bravo Company Area of responsibility when they spotted three vehicles coming from the Northern direction driving Southerly towards the general direction of their Observation Post at the vicinity of Steenbok Trust outside Komatipoort Mpumalanga Province.
Read more
Home News Sixteen Injured In Taxi Crash: Gunjini – KZN
Facebook
Twitter
Pinterest
WhatsApp

South Africa: Sixteen (16) people were injured after the mini bus taxi they were travelling in collided head on into a shipping container at Lockhart High School in Gunjini – KZN this morning (Tuesday).

Reaction Officers & RUSA Medics were dispatched to the school and, on arrival, confirmed that thirteen people were injured in the accident. Some of the injured, including the driver of the white Toyota Hiace, were transported privately to the hospital.

Medics stabilised the remaining passengers before transporting them to a medical facility by ambulance.

According to one of the passengers, they were travelling downhill when the brakes on the taxi failed. The driver veered off the road and onto the school premises before his vehicle crashed into a shipping container. 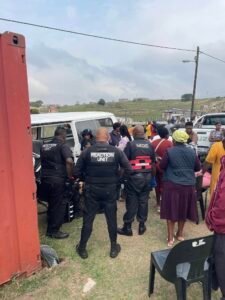 Several scholars were entering the premises at the time of the accident but were not injured.