South Africa: MEC Motlagomang “Mamiki” Qabathe made time in her busy schedule to see the Jagersfontein community that has been staying temporarily in the Sandstone Hotel as they were going back home this morning.

MEC Qabathe wished the community well as they began to rebuild their lives after the mining disaster that destroyed their homes on 11 September 2022.

She wished them well and further encouraged them to have the courage to start over and that it is better that they are going to be united with their communities and will notics any developments taking place in Jagersfontein.

The MEC thanked the team from the Department that has been assisting since residents were brought to both the President Hotel and Sandstone Hotel. The departmental team comprised the Acting HOD, Senior Managers, Social Workers from management Social Auxiliary Workers, Community Development Practitioners and the Special Programmes Unit.

Organisations, businesses and Provincial departments that have been assisting were also thanked by the MEC. 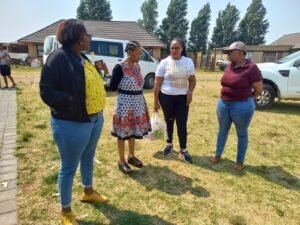 The rest of the community going back to Jagersfontein, received the kitchen packs donated by Al Imdaad Foundation. They expressed their gratitude to the MEC and her staff for all services they were provided, which went a long way in making their stay in Bloemfontein a comfortable one. They were happy to be going home, as some were anxious about getting back to some normality.

With that, the MEC wished them a safe trip back home and saw them off.