South Africa: On 28 January 2023 at about 10h30, members of the 15 South African Infantry Battalion were on Observation Post along the Republic of South Africa/Mozambique border in the Bravo Company Area of responsibility when they spotted three vehicles coming from the Northern direction driving Southerly towards the general direction of their Observation Post at the vicinity of Steenbok Trust outside Komatipoort Mpumalanga Province.
Read more
Home News South Sudan President Kiir met with US ambassador to discuss Subnational communal...
Facebook
Twitter
Pinterest
WhatsApp

JUBA, South Sudan- His Excellency President Salva Kiir Mayardit met with the United States ambassador to South Sudan, H.E Michael J. Adler. The purpose of the meeting was to discuss the issue of Subnational communal violence in the Country and bilateral relations between South Sudan and the United States.

As strategic partners, they addressed several challenges and opportunities that necessitated close coordination between the two Countries.

During the meeting, President Kiir assured the US Ambassador that the Government of South Sudan had taken serious steps to find peaceful solutions for the current subnational violence in parts of the Country.

The President explained how the Government has already dispatched security forces to the areas of communal conflicts to stabilize the security situation in those areas. The Government has also sent prominent intellectuals and elders specific to those areas to Initiate peaceful dialogue and reconciliation so communities can peacefully co-exist.

The President spoke on matters regarding the states and expressed how he has recalled the Governor of Unity state, Hon. Joseph Monytuil is to report back to Juba. For the purpose of verifying the facts that were founded by the investigation committee as a result of the situation that happened in Mayom County, Unity State. That led to the Extra Judicial Killings following the killing of the Commissioner of Mayom County.

President Salva Kiir expressed his sincere appreciation for the support the United States of America has continued to render to the people of South Sudan.

The meeting was attended by the Minister of Presidential Affairs, Hon. Dr. Barnaba Marial Benjamin. 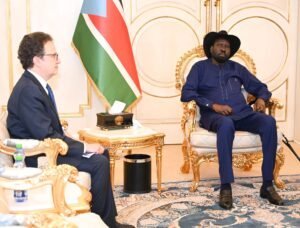