South Africa: Brave men and women in the military should always be honoured for their sacrifices because they willingly risk their lives to protect the people’s freedom. This is a selfless act of valour, asking for nothing in return.
Read more
Home Health World AIDS Day 2022: Health Minister inaugurates First Community Sexual Health Center
Facebook
Twitter
Pinterest
WhatsApp

World AIDS Day, observed annually on 01 December, is being marked this year under the theme Equalize.

The Director of PILS, Mrs Annette Treebhobun, the President of PILS, Mr Thierry Arekion, and representatives of the Ministry of Health and Wellness, as well as Non-Governmental Organizations (NGOs), were present.

Speaking at the event, the Minister commended PILS and all Non-Governmental Organizations for their commitment over the years to providing assistance to individuals suffering from HIV/AIDS while highlighting public and private collaboration to fight against stigmatization and prejudices.

World AIDS Day, he said, is a symbolic date to pay tribute to all those who have lost their lives due to AIDS.

The Ministry of Health and Wellness pointed out that Dr Jagutpal will provide the Banian Centre with doctors, nurses and paramedical staff to cater to the needs of patients who have contracted HIV/AIDS. Initially, the sessions will be held twice a week, and he underlined adding that the hours of services will be extended in the future.

Highlighting the initiatives of the Ministry, Dr Jagutpal spoke of the introduction of the HIV and AIDS (Amendment) Bill, which has the objective of amending the HIV and AIDS Act so as to widen the scope of HIV testing nationwide and allow for a greater number of persons to know their HIV status.

On this score, he elaborated on self-testing against HIV/AIDS, which he highlighted, already exists in 53 countries and is reliable. The Bill will make provisions to enable a person to conduct his own HIV test through the use of an HIV Self-Test or a Directly Assisted HIV Self-Test, other than the mandatory requirement for an HIV test to be conducted only by a medical practitioner, a nursing officer, the paramedical staff or trained non-healthcare providers.

Regarding other initiatives, Dr Jagutal indicated that the Ministry already offers PREP treatments, the Pre-Exposure Prophylaxis and PEP treatment, namely the POST EXPOSURE PROPHYLAXIS, which allows a person already infected with HIV/AIDS to no longer be contaminating their partner. 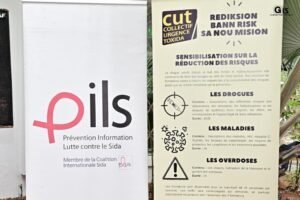 Also speaking at the event, the Director of PILS underlined that World AIDS 2022 is a moment to reflect on what has been achieved as regards addressing the inequalities as regards AIDS. This Centre will offer a variety of services to tackle the stigma faced by people living with AIDS. The need for national awareness of sexual education was also highlighted by Mrs Treebhobhun.

For his part, Mr Arekion spoke of the importance of concerted efforts and collaboration of both the public and civil society so that everyone is taken on board and is welcomed.

The Banian Centre will offer health services related to HIV/AIDS, and treatment will also be available for Hepatitis C and Syphilis. It will also provide a platform where individuals can meet their peers or people with whom they can identify without any fear of being judged.