South Africa: On 28 January 2023 at about 10h30, members of the 15 South African Infantry Battalion were on Observation Post along the Republic of South Africa/Mozambique border in the Bravo Company Area of responsibility when they spotted three vehicles coming from the Northern direction driving Southerly towards the general direction of their Observation Post at the vicinity of Steenbok Trust outside Komatipoort Mpumalanga Province.
Read more
Home News Golden Jubilee of CIEL Floréal: PM Jugnauth acknowledges contribution of CIEL Group...
Facebook
Twitter
Pinterest
WhatsApp

CIEL Floréal Knitwear celebrated its 50th anniversary yesterday in its former premises in Mangalkhan, now refurbished and converted into a modern and elegant business centre known as Nouvelle Usine. The event was held in the presence of the Prime Minister, Mr Pravind Kumar Jugnauth; the Chairman of CIEL Group, Mr Arnaud Dalais, the Chairman of CIEL Textile, Mr Jean-Pierre Dalais, as well as other eminent personalities.

The transformation of Nouvelle Usine into an urban business centre is the first in a series of projects to restore former industrial buildings led by CIEL Properties. The 14,000 square metre building, home to CIEL Textile, has been redesigned to accommodate a new generation of businesses in a modern setting, in line with the Government’s aim to create dynamic, mixed-use areas surrounding metro stations.

In his address, the Prime Minister warmly thanked Floréal for his contribution to the development of the country and commended the Group for its “glorious 50 years of success”. Mr Jugnauth congratulated the company’s former directors, current directors and employees. “You have achieved an incredible milestone and are moving on to bigger and better things. Not only for your organisation but also the entire hospitality industry in Mauritius,” he said.

He recalled that Floréal Knitwear has also contributed to the country’s industrialisation and expressed special appreciation to Sir Pierre Dallas and the Group’s other founders, whom he added, had a far-sighted vision and a deep commitment to morphing the industry into a powerhouse.

Furthermore, the Prime Minister also praised the Group’s strong performance: This is the result of well-elaborated strategies based on technological development, continuous talent development, market expansion and sustainable production. He stated that CIEL Textile is more than just a supplier and positions itself as a reliable partner in the fashion world. With a mission to “make fashion better every day”, the Group offers a wide variety of products, services and innovative solutions to its customers worldwide. Each year, 43.5 million pieces of clothing are created with passion by CIEL Textile’s 23,000 talents across its 19 production units in Mauritius, Madagascar, India and Bangladesh, he said. 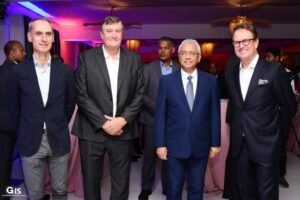 He pointed out that Floréal’s expansion in this region of the country demonstrates the Group’s commitment to help advance and create jobs for all and improve the quality of life for all. “I am convinced that with the support of our partners in the field, our country is heading toward brighter days. I am certain that as you are celebrating your past, you are also shaping the future,” he said.

Speaking about sustainability, the Prime Minister said that the adoption of cleaner technology is essential for survival and hence the need to implement a green technology strategy to gain a competitive edge. He expressed appreciation that CIEL Group has adopted sustainable practices in a quest to meet the stringent requirements of international buyers and is determined to offset the negative effects of their Green House Gases emissions by investing in renewable energy sources and energy-efficient solutions to replace the use of fossil fuels.

As regards the difficult phase resulting from COVID-19, he recalled that the Government had taken timely decisions to safeguard the health and safety of the population as well as save jobs. He rejoiced that these measures have to help Mauritius to resurface stronger and to bounce back economically.

Manufacturing, he stated, has been among the front runners, which have recovered their pre-COVID levels with a 13.2 % progression in output last year. Similarly, the export of manufactured goods increased by 16.5 %. At the national level, the export of Textiles and Clothing went up from Rs 20 billion in 2020 to Rs 22.9 billion in 2021, he said.

Prime Minister Jugnauth indicated that the rising trend is being maintained. In the first semester of 2022, domestic export registered a growth of 20.3 % compared to the same period last year. In particular, the export of textiles and clothing witnessed a surge of 16.7 %. All other sub-sectors, including Fish and Fish Preparations, Medical Devices, Jewellery, and Watches and Clocks, performed equally well, he underlined.

He, however, acknowledged that the manufacturing sector is in need of additional labour to cope with the increasing demand. He highlighted that Government is fully attentive to the requests of operators for the recruitment of skilled foreign workers adding that every effort is being made to expedite the processing of applications. 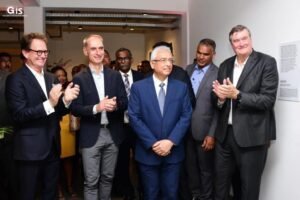 As regards support measures which have been put in place to assist manufacturing enterprises, he stated that exporters are benefitting from the Trade Promotion and Marketing Scheme, the Freight Rebate Scheme, the Export Credit Guarantee Insurance Scheme, and the Africa Warehousing Scheme. He indicated that for the period July 2015 to September 2022, Government has disbursed more than Rs 1 billion to support manufacturers in their export drive. Similarly, the services of the Industrial Finance Corporation of Mauritius Ltd have been reinforced to cater for the needs of business operators.

For his part, the Chairman of CIEL Textile, Mr Jean-Pierre Dalais, said that the Nouvelle Usine embodies the leading Mauritian textile group’s devotion, values, and determination to place sustainability at the heart of its development. “With Nouvelle Usine, we are entering a new era of shared and sustainable growth”, he added.

He recalled that the story of CIEL Textile began with Floréal Knitwear, which counted only 150 employees at the time. By diversifying into textiles in the 1970s, CIEL Group enabled the creation of a thousand jobs through its factories in rural areas,” he said.

As for the Chairman of the CIEL Group, Mr Arnaud Dalais, he acknowledged the contribution of those who have helped drive the Group forward. “The road has not been easy; it has even been tough at times. However, we have had high-quality teams and enlightened management working with us each time. Our history is one of men and women, one of hard work and the continuous pursuit of excellence in our operations, with the ultimate goal of ensuring the satisfaction of our customers”, he concluded.

Prime Minister Jugnauth then proceeded to inaugurate the exhibition entitled “50 years of Timeless vision”, which allowed guests to relive the significant events of the Group’s history and reflect on the company’s contribution to the country’s economic development.