South Africa: Brave men and women in the military should always be honoured for their sacrifices because they willingly risk their lives to protect the people’s freedom. This is a selfless act of valour, asking for nothing in return.
Read more
Home News Grandfather Withdraws Baby Kidnapping/Human Trafficking Case: Durban – KZN
Facebook
Twitter
Pinterest
WhatsApp

Africa: A case of Kidnapping registered in March 2022 was withdrawn by the grandfather of a baby girl who was located with a couple in Reservoir Hills – KZN.

On Wednesday (16/03/2022), a 59-year-old Ottawa – KZN resident arrived at Reaction Unit South Africa (RUSA) HQ pleading for assistance to locate his 14-month-old granddaughter Nadia who he believed was sold to a wealthy family.

The emotional man informed Reaction Officers that his daughter left home 14 years ago after she began drinking & partying excessively. She then became drug addicted. She returned to her family home a year later but concealed the birth of her son from her family.

The aged male further explained that his daughter relocated to Isipingo – KZN where she once again began consuming drugs and alcohol. While living with her maternal aunt, she once again fell pregnant, and the father’s identity was never disclosed. She gave birth to a baby girl named Nadia in early 2021. She then left her child with her 70-year-old aunt and has not been seen since.

When the aunt passed on in January 2022, the grandfather brought Baby Nadia and registered her as his surname. He received consent from Child Welfare to act as a guardian for the baby until the mother was located. 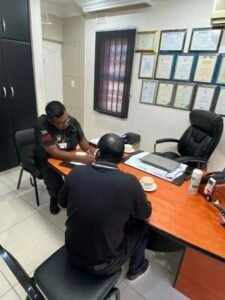 The child remained in the care of the immediate family for two months after her grandmother passed on.

In March 2022, whilst at a family get-together at his residence in Mount Vernon, KZN, a known tow truck operator came to the home seated at the rear of a silver new model Mercedes-Benz.

The tow truck operator alighted from the vehicle, approached the family and requested to see the baby as pre-arranged with the uncle of the child’s mother’s brother).

The grandfather said he called his son, and a telephonic argument broke out. During this argument, an Indian couple alighted from the Mercedes-Benz and approached them, requesting only to view the child as arranged. The tow truck operator intervened and hastily left the yard with the unidentified couple.

On Saturday (05/03/2022), the child was in the care of her mom’s sister living in Dawncrest – KZN. At approximately 22:30, her uncle (the mother’s brother) arrived at the home unannounced and removed the baby and her belongings. Her birth certificate was also taken. She was not seen or heard from since. 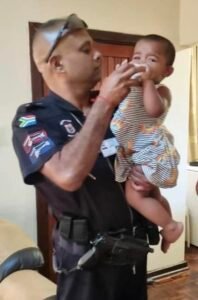 The child’s uncle blocked off family on social media and refused to take any calls or disclose the whereabouts of the missing 14-month-old baby. The grandfather decided sought assistance from RUSA (picture 2), convinced that the child had been sold.

Reaction Officers circulated the incident on social media. Within minutes of the circulation, Officers received a call from the child’s uncle that Baby Nadia was safe at his residence in Ramsgate – Port Shepstone.

When Reaction Officers requested to see the child, the uncle promised a video call within a few hours. He was unaware information was received that the child was sold to a couple in Reservoir Hills & Reaction Officers were en route to rescue the child before he was moved to another location.

RUSA Members observed the residence, and a silver Mercedes Benz was found in a park in the yard. Officers entered the property, and Baby Nadia was located on an upper level of the home in the care of an elderly female.

The couple informed Reaction Officers that they intended to adopt the baby. However, they failed to inform Child Welfare or Law Enforcement that the baby was in their care.

They added that they could not bore children & were informed that a baby girl was available immediately. They further confirmed that the infant was dropped off by the tow truck operator, who they accompanied to Mount Vernon to view the child in March 2022.

The couple offered to meet with the child’s grandfather to resolve the issue. Baby Nadia and the couple were escorted to the RUSA HQ at 12:35 on the same day. The elderly male became enraged when he confronted the couple.

He insisted that they be criminally charged & desired a case of Kidnapping & Human Trafficking.

He then proceeded to the Verulam SAPS to register a criminal case. The matter was thereafter transferred to the Family Violence, Child Protection & Sexual Offences Unit (FCS) based at the Phoenix SAPS.

Investigators were making enquiries into the case when the grandfather allegedly withdrew the charges before the son, tow truck operator or the couple were arrested. No reason was provided.

It could not be confirmed if the suspects in the matter had paid the elderly male to withdraw the criminal case.