Mauritius: A two-day General Training on Biofouling Management, jointly organised by the Ministry of Blue Economy, Marine Resources, Shipping and Fisheries and the International Maritime Organisation (IMO), kicked off this morning, at the Caudan Arts Centre, in Port Louis, the Minister of Blue Economy, Marine Resources, Fisheries and Shipping, Mr Sudheer Maudhoo, was also there.

The Training Course on Biofouling Management is part of the capacity-building initiative under the GloFouling Partnerships Project, which is a partnership between the Global Environment Facility (GEF), the IMO, and the United Nations Development Programme (UNDP).

In his address for the occasion, the Minister of Blue Economy, Marine Resources, Fisheries and Shipping recalled that the Blue Economy represented over 10.5 % of the Gross Domestic Product (GDP) of Mauritius, with total direct employment estimated at over 20,000, excluding coastal tourism.

He highlighted the Government’s commitment to establishing the Blue Economy as a pillar of Mauritius economic development strategy, with an objective to double its contribution to GDP by 2025 through its various components, namely the maritime sectors, the seaport-related activities, the fisheries sector and the Offshore Extractive Industry – Hydrocarbon and seabed minerals.

Hence, Mr Sudheer Maudhoo affirmed that the GloFouling Partnerships Project was not only time for the country but also a must for the Blue Economy of Mauritius to thrive.

He stressed that the looming threat and entailing impact of uncontrolled biofouling could be disastrous to the development of the Mauritius maritime industry. The Minister was of the view that the training would be instrumental in giving stakeholders a better insight into how to tackle the biofouling issue in the interest of Mauritius.

Moreover, Mr Maudhoo informed that Ballast water, which constituted another way of transferring and introducing invasive alien species, was already being addressed by the Ministry over the past decade through a number of various initiatives, from awareness raising to putting the appropriate systems for compliance.

The Minister underlined as well that no stone would be left unturned to ensure that all other deliverables under the GloFouling Partnerships Project were successfully implemented so as to protect the country’s marine biodiversity from the introduction of non-indigenous species. 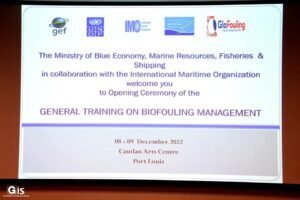 According to the IMO, biofouling is the undesirable accumulation of microorganisms, algae, plants, and animals on the surface of ships, namely on submerged structures such as hulls and on other marine mobile infrastructure.

It is deemed to be an essential means of transferring invasive aquatic species, which, if established in new ecosystems, may pose threats to the environment, property, human health and resources.

The purpose of the GloFouling Partnerships Project is, therefore, to build capacity in developing countries in order to execute the Biofouling Guidelines issued by the IMO for the control and management of ships’ biofouling to minimise the transfer of invasive aquatic species and to protect marine ecosystems.

Launched in December 2018, the GloFouling Partnership project would assist, over a five-year span, twelve lead partnering countries, comprising Mauritius, in a bid to assess their current status in relation to invasive aquatic species, including a guide for developing a national strategy, an economic impact study and specialised training courses on marine biofouling and legal issues related to the implementation of IMO’s Biofouling Guidelines.

The General Training on Biofouling Management aims thus at raising awareness on the issue of biofouling-mediated marine invasive species and at securing the collaboration of stakeholders in the effective implementation of the Biofouling Guidelines.