South Africa: Exercise VUK’UHLOME, which is currently in full swing at the South African Army (SA Army) Combat Training Centre (CTC), is refreshingly different from many exercises as it is filled with many extra firsts which were introduced by the Chief of the SA Army, Lieutenant General Khulekani Lawrence Mbatha and his formidable team.

One such first was the resoundingly successful Operational Dinner (Ops Dinner) which was held simultaneously by different Brigades at different venues on Saturday the 5th of November 2022.

The auspicious occasion was geared specifically to share the pertinent practices, customs and traditions as reference points that connect the SA Army with the past to the present.

According to SA National Defence Force, “Customs and traditions have, over the years, been a vital component of the SA Army, as they add incredible value in shaping and developing this glorious organisation that does not hesitate to act with courage, loyalty, dedication and unflinching determination in discharging its constitutional obligations of preparing, providing and sustaining the combat-ready land forces for employment by the Chief of the SA National Defence Force.”

Furthermore, the formal statement reads: The Ops Dinner was a progressive step in the right direction by the leadership of the SA Army as it represented a unique and timely opportunity for its members, who are regarded by many as the “indispensable members of the Nation” owing to the unique nature of their duties.

During this event, the attendees benefited handsomely from their Brigade commanders, who gave them a fascinating insight into various traditions of the Brigades. 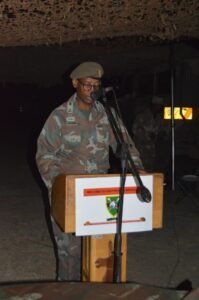 Vision-oriented Brigade Commander had this to say about the occasion: “The intent of Ops Dinner is to share the pertinent practices, customs and traditions as a reference point that connects us with the past to the present, stated Brigadier General (Dr) M.P. Sereko of the Light Modern Brigade. The event was graced by the presence of the Division Commander, Major General P.N. Dube.

He said: “The purpose of the evening was to observe one of the customs and traditions in fostering a camaraderie and esprit de corps“. 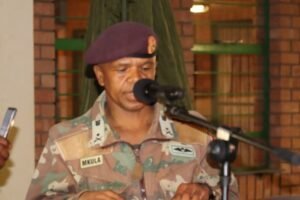 He was quite adamant that it is a prideful and historic moment which symbolises the last warm, sumptuous meal which is enjoyed by soldiers before a battle or combat readiness exercise.

It was also an indescribable feeling to see members of the “Airborne family,” 48 Airborne Modern Brigade, who had for most of the day been turning the blue sky into camouflage, hosting their own Operations Dinner after having dominated the City of Roses’ sky with their parachuting tactics which left onlookers agape with admiration and others green with envy.

Members from 48 Modern Airborne Brigade were well determined than ever to be at the heart of the action at the SA Army Combat Training Centre skies during Exercise VUK’UHLOME.

During his keynote address during this Operational Dinner which was held at General De Wet Shooting range, Brigadier General B. Mkula, who is also a parachutist of note, and General Officer Commanding of 48 Airborne Modern Brigade, said: “The Airborne family is an incredible resourceful force, the cream of the crop and the enablers to up efficiency in the SA Army’s operations.”

He went on to share an inspiring message using the acronym “PRIDE”, which stands for Perseverance, Respect, Inspire, Discipline and Enthusiasm. He emphasised that members of the PRIDE must subscribe to these five letters. The “Airborne family” was graced by the presence of the Deputy Division Commander of Exercise VUK’UHLOME, Major General L.A. Puckree.

At Motorised Modern Brigade, the atmosphere was also electrifying, and the Ops Dinner also lived up to its expectations. During his keynote address, the General Officer Commanding the Brigade, Brigadier General L. Zicina, urged the members of his Brigade to remain positive and work together like a well-oiled machine during this Exercise. The event was graced by the presence of the Division Chief of Staff, Brigadier General J.K. Thys.

With all the Brigade Commanders having painted the picture quite clearly regarding the traditions of their Brigades, there is no doubt that this auspicious occasion, which is the first of its kind, will still linger on the lips of the members of the pride who had attended, for many decades to come.