South Africa: Brave men and women in the military should always be honoured for their sacrifices because they willingly risk their lives to protect the people’s freedom. This is a selfless act of valour, asking for nothing in return.
Read more
Home News Deaf learners will get a chance to attend Full-service school; Read Here...
Facebook
Twitter
Pinterest
WhatsApp

According to the Mpumalanga Department of Health, This is the first cohort of deaf learners from the Province to write the National Senior Certificate Examination, and so far, the Department is satisfied with how the examination has progressed.

The (SASL) was recognised by the Department of Basic Education (DBE) as an official Home Language in 2014.

Sign language was now considered a subject, and first time, it occurred in the 2018 National Senior Certificate exams, in what was described as a major victory for the Deaf community.

In the Sign Language final examination, learners work in partitioned spaces (cubicles) with computers loaded with question papers and video-record themselves signing the answers.

The videos are then saved and sent to the public examinations directorate for further handling and submission to DBE for centralised marking. 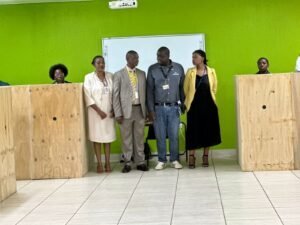 The cubicles are designed mainly to prevent unnecessary distractions and clear the recording from capturing other activities except for the learners’ responses to the questions.

South African Sign Language is a visual spacial language with its own distinct linguistic structure that includes syntax, morphology, phonology and language conventions.

It is not involved with any spoken or written language. However, it is a language in its own right.

In keeping with the targets of the Employment Equity Plan, the Mpumalanga Department of Education will only prioritise grade 12 learners with disability in the 2023 bursary awards.

The Department urges the learners not to let their guard down but exert themselves vigorously in their studies until the end of the examination period.